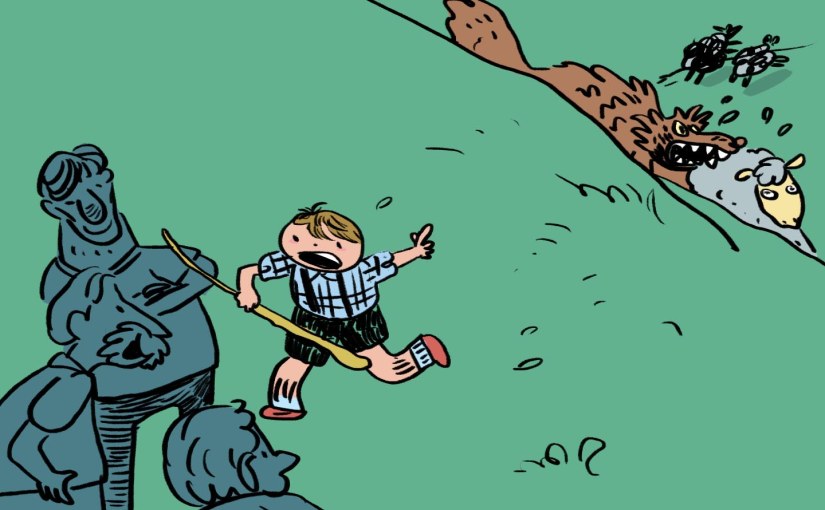 Jesus told stories. When he told them, they were just stories, though they revealed or hinted at deep truths. Later, because he was Jesus and all, the stories became scripture. But they were true and instructive even before they were scripture.

There’s a story I know (and you probably do, too) called “The Boy Who Cried Wolf”. It’s not scripture. Jesus didn’t tell it. But it reveals deep truth. Truth that seems especially relevant and needed these days.

Each person has a right to their opinion. Hopefully, those opinions are well-informed and sincerely held. But when people post or re-tell things that are factually untrue, designed to inflame animosity or just plain poorly-fact checked, they diminish the teller’s (or poster’s) credibility. If sources are to be believed (and I believe there is strong evidence), nations have now sought to de-stabilize other nations through campaigns of disinformation and through “bots”, the sole task of which is to troll and incite confusion. Unlike the little boy who cried wolf, this is not simply for mischievous entertainment.

I’m grateful for my friends who have different ideas and opinions than I. Sometimes, they are a source of enlightenment and keep me attuned to the fact that not everyone thinks the way I do. But those who keep yelling “wolf!” about things that are simply untrue or which they unquestioningly repeat as true without checking are not just hurting themselves. They are hurting us all, I fear. What happens when real, urgent truth needs to be shared? What happens when a dangerous situation needs to be attended or investigated?

Authors, thinkers, and philosophers have tried to warn us of this through their dystopian novels and predictions. I don’t think they were just crying “wolf”. But, just in case you need something more canonical than Aesop to make these thoughts worth considering, I’ll offer this (and there are many more I could have chosen):

There are six things that the Lord hates,
seven that are an abomination to him:
17 haughty eyes, a lying tongue,
and hands that shed innocent blood,
18 a heart that devises wicked plans,
feet that hurry to run to evil,
19 a lying witness who testifies falsely,
and one who sows discord in a family.

I promise – for your sake and mine – not to cry “wolf”. Will you do the same?