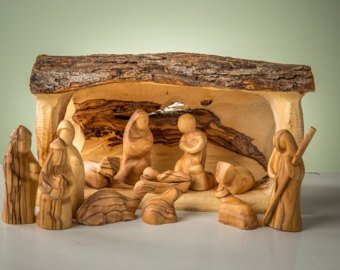 Georgia and I own several nativity sets. But when the children were young, we had just one. It was and still is treasured.  My dad brought it back as a gift to us when he went to Israel, almost 40 years ago. It’s made of olive wood from the Holy Land. In those early days of our marriage, when we got the Christmas stuff out we would set it up and when the children were young – between about 3 and 7 years old – they loved to play with it. Because it was made of wood and not some delicate material like china or glass, we would put it down on the floor for them and we enjoyed hearing them moving the characters around, pretending they were having conversations with one another.

Our daughter Paige brought her stuffed animals, placed them around then manger and the holy family… our sons brought their action figures and teenage mutant ninja turtles to stand and join with the wise men and shepherds… and to my recollection (which, by the way is always better than what actually happened), each of them explained by saying, “they wanted to come see Jesus, too.”

So, here’s a question: Have you ever thought about how that sort of attitude is really a very important part of what Christmas is all about?

Think about it: the gospels say that angels appeared to shepherds. And the shepherds, after hearing about this thing said, “let’s go see.” Not “I’m going to go see, you guys can stay here.” Not, “a few of us are going, we don’t want the rest of you going with us”. There may have been a teenage shepherd who said, “I’m tired, I don’t want to go.” We aren’t told about this. What we’re told is that they sort of encouraged one another, and said, “let’s all go see.” And when they arrived, they told Mary and Joseph what the angels had said. My guess is that they continued to tell others about that night for as long as they lived.

Who is Christmas for? Well, we who believe in Jesus and follow him as his disciples all anticipate it and enjoy it.  In a very real way, we sort of help sponsor it, in the sense of opening our churches and having special services and remembering together what it’s all about. Hopefully, there is a sense of renewal in our hearts, and re-commitment in our living. There is a peace that comes upon us when we believe that God does care, and that God is willing to help. We may not know exactly how things are going to turn out, or how God will help, but knowing God will somehow help can transform our lives. So the gift of Christmas – of God, sending a Savior – is for us.

But theologically speaking, Christmas is especially for those who haven’t yet seen. Who haven’t yet heard. It’s for anyone who is willing to come close enough to discover the wonderful news of a God who reached down to humanity in the form of a baby, who grew up to become our Savior.

Because apparently God is very interested in inviting new people into relationship with him. What was it that Jesus left his disciples with? What were his parting words? “Go into all the world… teaching others what I’ve commanded you…”

Who would we compare them to? Oilfield workers? Roughnecks? Bartenders at some rough-and-tumble biker bar? You think they didn’t tell dirty jokes or share crude humor? And yet it was they whom God selected to help celebrate the birth of one who would be known as the friend of sinners. Does this tell us something?

And when we receive that message, there’s both peace and restlessness. There’s a peace that comes in knowing we have been loved with an everlasting love. That no matter what happens, we belong to God. But there is also a kind of restlessness, because we want others to find it, too.

So hold on to the peace you have, the peace you have come to know through Christ. Hold onto the relationship with God that you have been granted. But want it for others, as well. Want peace in their lives, too. Invite them to come see and meet the savior, because that’s how peace spreads and grows.

3 thoughts on “Peace and Restlessness”